We are very pleased to announce that SASWE now has an Honorary Patron, Barrie Hingley. 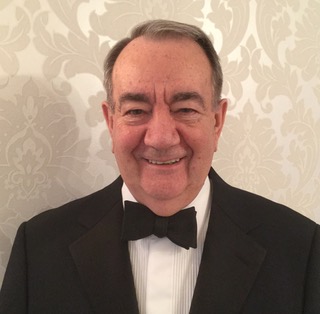 Wing Commander Barrie Hingley OBE BMus LRAM ARCM RAF (Ret’d) Barrie Hingley was educated at Drax Grammar School and started his musical interest in the Salvation Army Band in Selby, Yorkshire. He joined Royal Air Force Music Services in 1956, spending a year in the RAF School of Music, and later gained conducting diplomas at The Royal Academy of Music and The Royal College of Music followed by a Bachelor of Music Honours Degree at London University.

As Principal Director of Music he conducted hundreds of concerts, parades, recordings and broadcasts in the UK and many of his arrangements and compositions have been recorded by RAF Bands. He conducted the RAF Central Band on tours of France, Hong Kong, Canada and on two major tours of the USA. He became Senior Director of Music of the three Services and had musical responsibility for many National events. The tribute to HM Queen Elizabeth the Queen Mother in celebration of her 90th birthday held on Horse Guards Parade in June 1990 involved the co-ordination of many bands and choirs, conducting over 1000 musicians and writing much of the music. He was awarded the OBE in the 1995 New Year’s Honours List just prior to his retirement.

After leaving the RAF he has continued to compose and arrange music. His music is constantly played in TV and Radio programmes throughout the world. Commissions have been completed for HM The Queen’s Annual Christmas television broadcasts, including a new version of the National Anthem recorded by the Choristers of Westminster Abbey; the Sultan of Oman’s 25th Anniversary Celebrations, the Centenary Celebrations in Saudi Arabia, the 50th Anniversary of VE Day performed by a large Symphony Orchestra and 1000 voice choir, and music for BBC TV broadcasts and tribute events on Horse Guards Parade with massed service bands, choirs and orchestras. The National Youth Ballet commissioned him to write a ‘Nativity’ Ballet which has been performed at the Royal Albert Hall, on BBC TV and Sadler’s Wells. His music has been used for many films, documentaries and TV programmes, the Royal Tournament, the Festival of Remembrance, and the Edinburgh Tattoo.

He was appointed Director of Music for the Queen’s Golden Wedding Pageant, a celebration with over 1,000 horses in Windsor Great Park, with musical forces included the Massed Bands of the Guards Division, a large Symphony Orchestra, Six Fanfare Teams, Massed Mounted Bands and the 300-piece Bach Choir under Sir David Willcocks. Unfortunately, with rehearsals completed and CD’s recorded and ready, the event had to be cancelled because of extreme weather conditions!

Other commissions have included writing the music for the Queen Mother’s 100th Birthday Celebrations, including Her Birthday Song, and music for the huge musical forces in the Mall and forecourt of Buckingham Palace for HM The Queen’s Golden Jubilee celebrations for which he was director of music. His Jubilee Anthem for that event was recorded by the Choir of St. Paul’s Cathedral and the Royal Philharmonic orchestra as an official tribute.

In retirement, Barrie Hingley’s interest and support for the Salvation Army in his early years still continues in Hillingdon, West London. He is also the President of the Royal Air Force Music Services Association.
Barrie says: “I heard the Salvation Army Symphonic Wind Ensemble (SASWE) perform recently at the Symphonic Hall, Birmingham. The Ensemble was heard during the day and in the evening concert alongside other Salvation Army Bands of the highest musical quality. Despite Salvation Army audiences being more familiar with the sound of a brass band, the fine musicality of the Wind Ensemble’s playing brought warm and enthusiastic applause from the audience. I thought it was well deserved.”

Our next engagement will be a Festival of Music at Morley Salvation Army, on the evening of Saturday 5 March 2022. We look forward to seeing you there!